The Collectors Club of Chicago

From 1968 the CCC has published original high quality philatelic books on various subjects, they are all well printed and bound and released at quite reasonable prices. All books are hard bound. All editions are limited, to date none have been reprinted and reprinting is not anticipated in the future. The Arthur Salm Foundation reports are listed at the bottom of this web page.

In the secondary market the CCC publications often sell for a premium, especially those that are out of print. We stock the in-print titles at the published price and the out of print ones as best we can. On the below listings the out of print should be in stock at the indicated prices but it is always best to confirm by e-mail.

U.S. Mail and Post Office Assistant, 1860-1872
The reprint of Holbrook's monthly newspaper for postmasters, it is devoted almost exclusively to postage rates, mail schedules and regulations with some advertising of postal interest. This is original primary source data and not an interpretations. 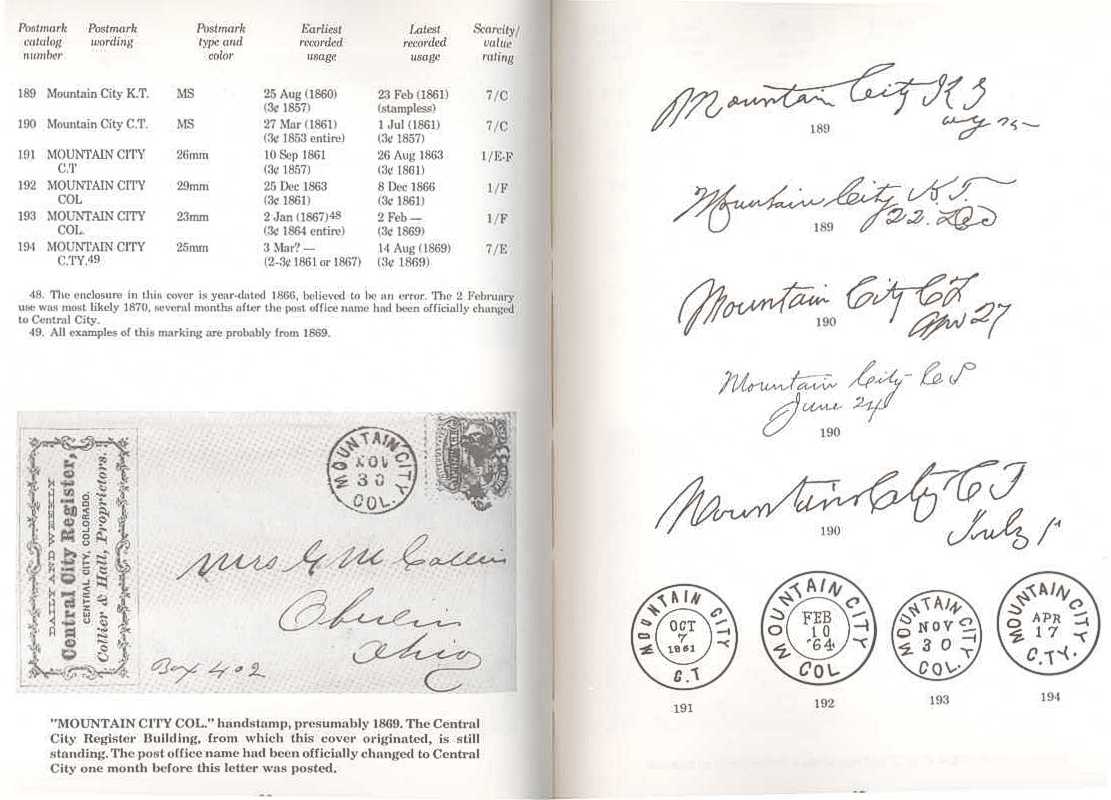 The Flight of the "Ville D'Orleans by Ernest M. Cohn

The Waterbury Cancellations 1865-1890 by Rohloff & Diamond 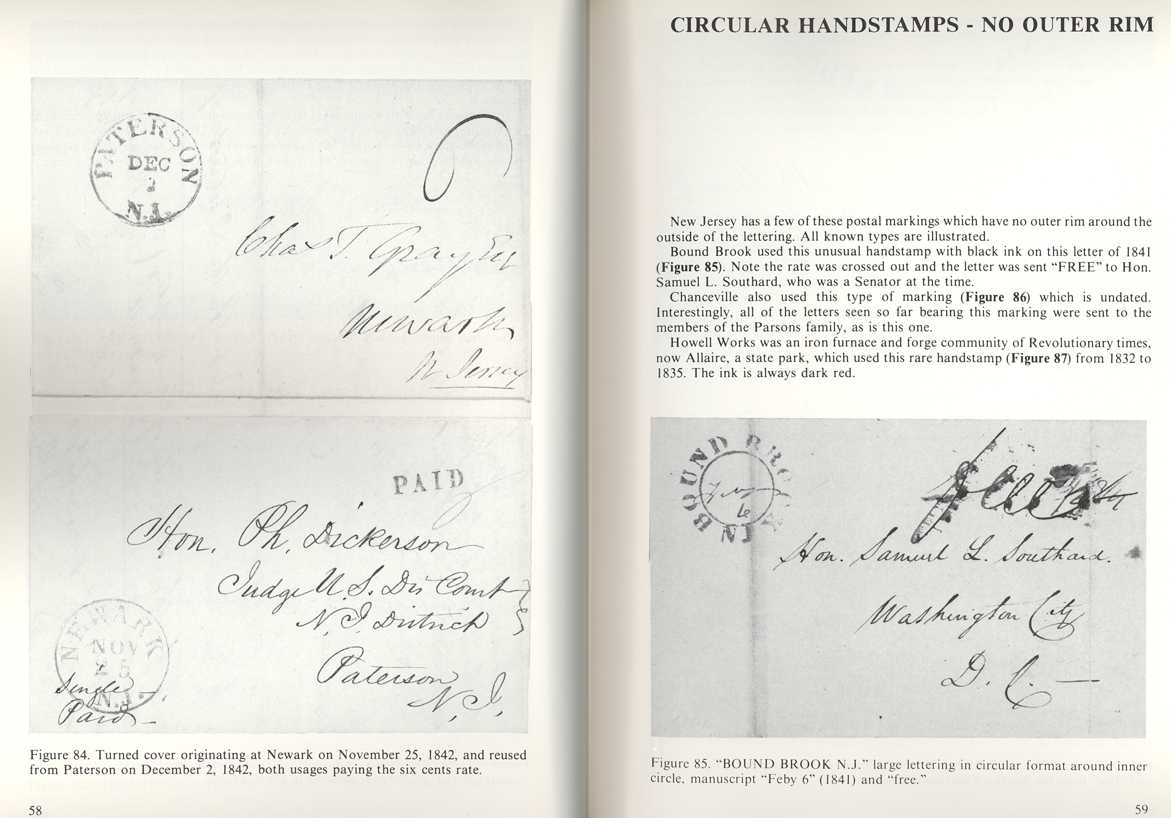 Postal Markings of Stampless Covers of New Jersey by William C. Coles Jr., LC No. 83-72780
Illustrates all stampless postmarks along with dates and rarity guide. Numerous interesting usages are illustrated and discussed such as: Canal, Railroad, Express, War of 1812, Way Letters, Registered and much more. 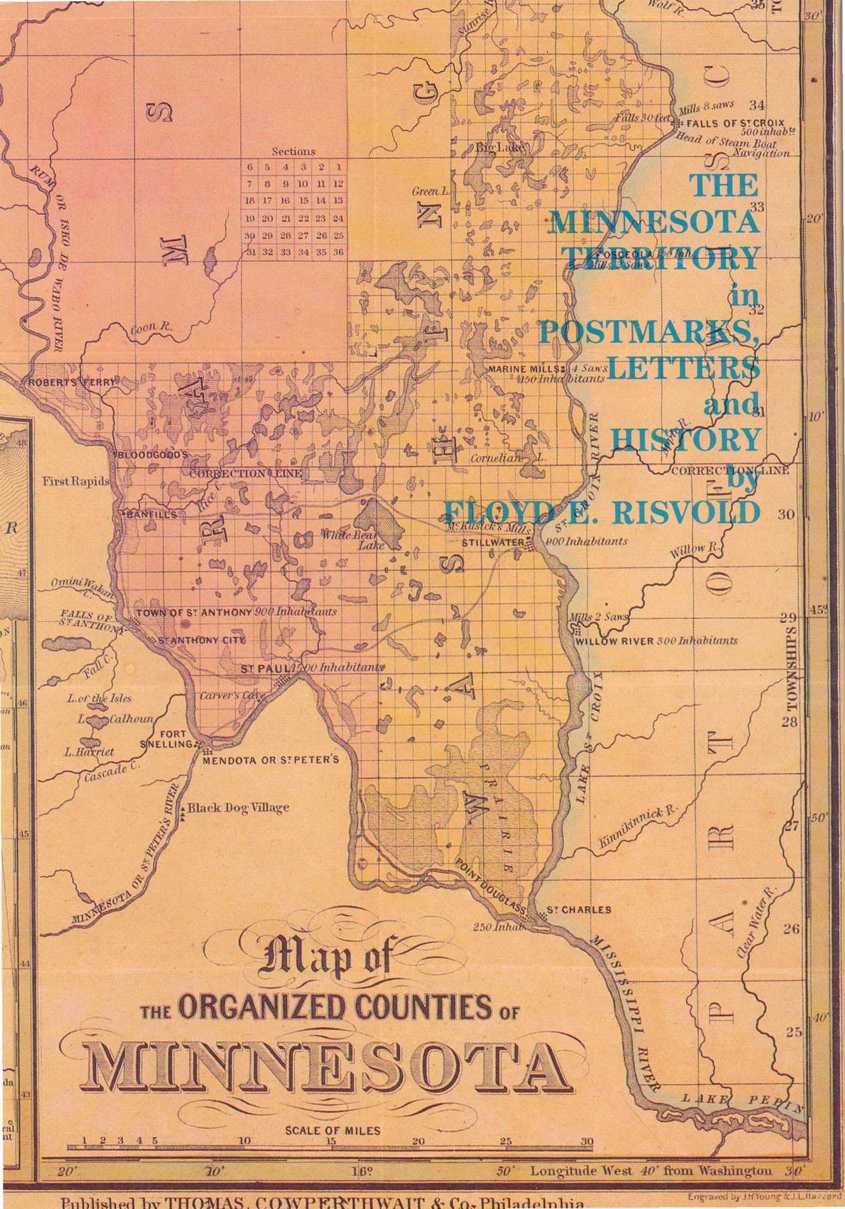 Minnesota, The Minnesota Territory in Postmarks, Letters and History by Floyd E. Risvold A most detailed study starting with the early history and 15 maps ranging from 1671 through 1858, the post offices with opening and closing dates, the markings with many drawings and about 200 covers illustrated and described.

Vessel-Named Markings on United States Inland and Ocean Waterways 1810-1890 by Dr. James W. Milgram
Most markings are shown on full covers, about full size, 1627 halftones of which 43 are CSA items. An excellent reference work for US Waterways. 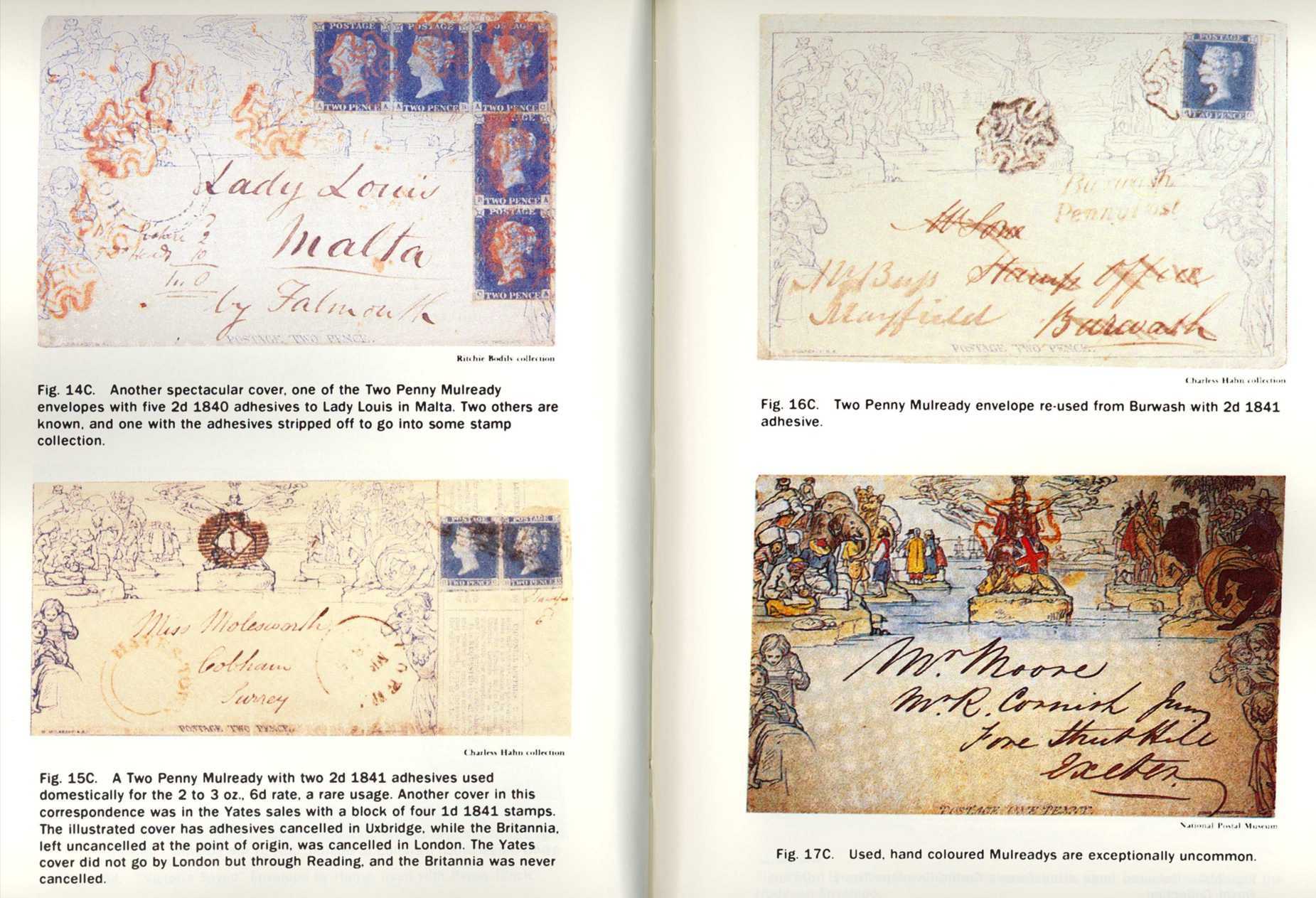 British Pictorial Envelopes of the 19th Century by Bodily, Jarvis and Hahn, LC No. 86-070478
A beautifully book, fine black and white illustrations, + 32 pages in full color. We apologized for the quality of the above image, the book is much better. The text is worth reading, enjoyable, informative and scholarly. 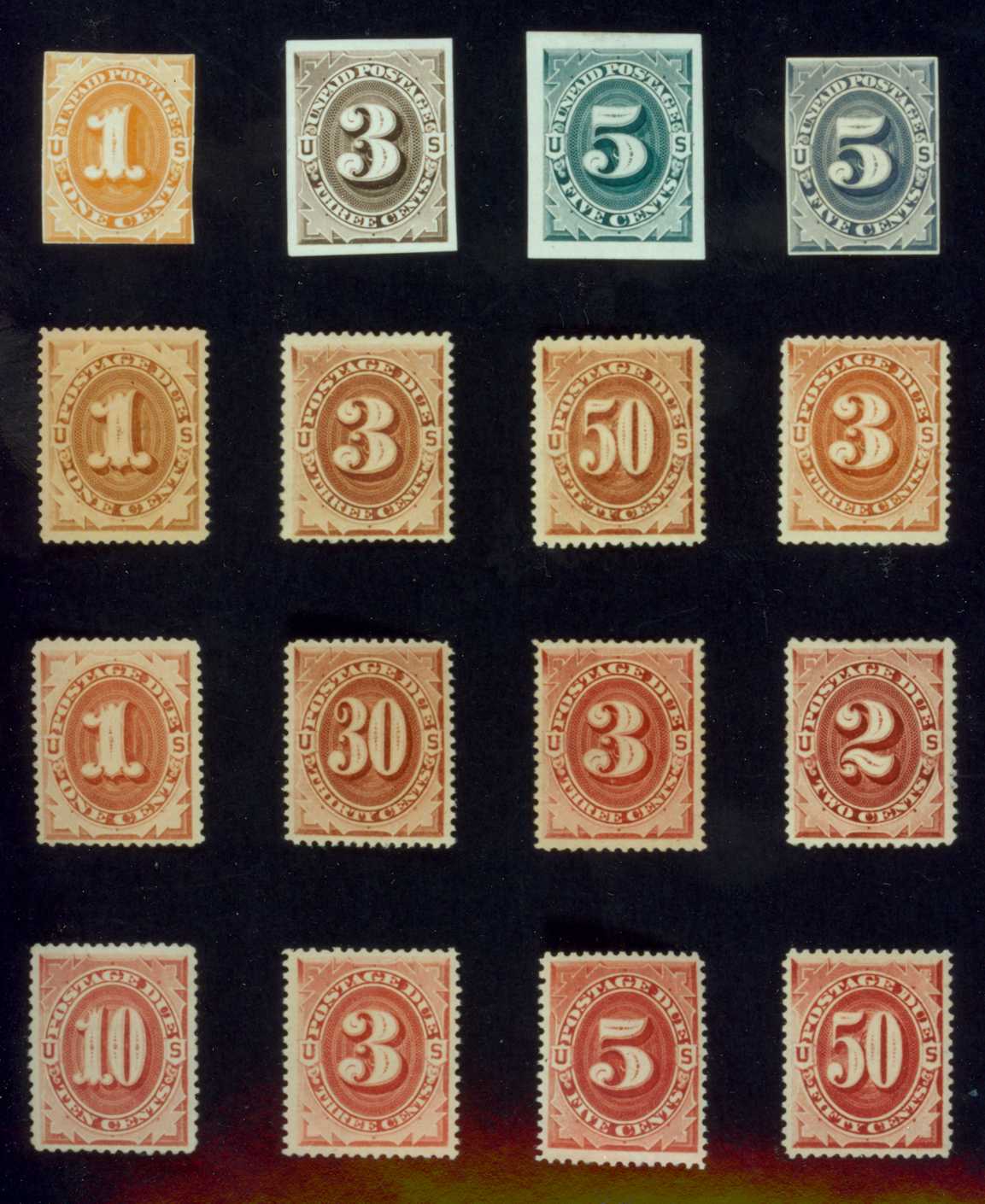 The U.S. Large Numeral Postage Due Stamps by George B. Arfken
This book covers all facets of the subject from the proofs and essays, stamps, markings and covers in addition to the regulations. A photograph is tipped in that is not perfect, nearly so, but is still of much value in determining the color.

Chicago's Crabgrass Communities by Dr. Harvey M. Karlen, LC No. 92-81856, ISBN 0-916675-04-1
The 19th Century towns surrounding Chicago which the city eventually encompassed, for a period these 82 post offices continued to operated independent of the Chicago PO though they were within the Chicago City Limits. The townships being such well known names as Hyde Park, Lake View, Jefferson, Lake, Calumet, and Cicero.

An Encyclopedia of Texas Post Offices by Walter Godfrey Schmidt, LC 93-071769, ISBN 0-916675-05-X
The post office establishment date along with the country is given and for the discontinuance we have an actual date or if still current the zip code. About 11,300 post offices are listed and 87 covers are illustrated. Texas under five flags: Spanish, Mexican, Republic, Confederate and the USA. 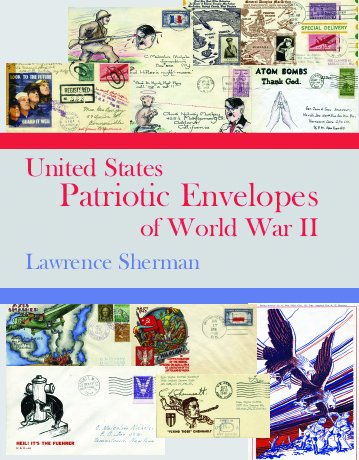 Patriotic Covers of World War II by Larry Sherman
List about 9,660 cachets, each with a description and a value code, listing of 627 publishers with chapters on the history of 25 major ones and 435 imprints.

United States Patriotic Envelopes of World War II by Lawrence Sherman
A new edition but not by the CCC. This edition is in full color and list over 11,060 cachets versus 9,660 in the first edition which sold out in several months. New Chapters: Hand Painted Cachets, The impact of the Patriotic Covers on the war effort, The wartime work of Jacques Minkus, etc.

The United States Post Office in World War II by Lawrence Sherman, LC 2001 131249, ISBN 0-916675-10-6
This book is based on the 1951 PO document titled A Wartime History of the Post Office Department with the addition of 300 illustrations and commentaries by today's postal historians.

Chicago's Mail, An anthology of postal history articles focusing upon the community's growth, it's interests, and its attitudes by Harvey M. Karlen, ISBN No. 916675-09-02
The author is first rate as is the text however the illustrations are not as one would expect from the CCC. This was realized thus the printing was quite limited, in fact the lowest of any CCC book. A collection of mostly previously published articles from the pre-Post Office period through the Chicago Perforations and the Civil War to the Century of Progress, it is quite useful to the collector. 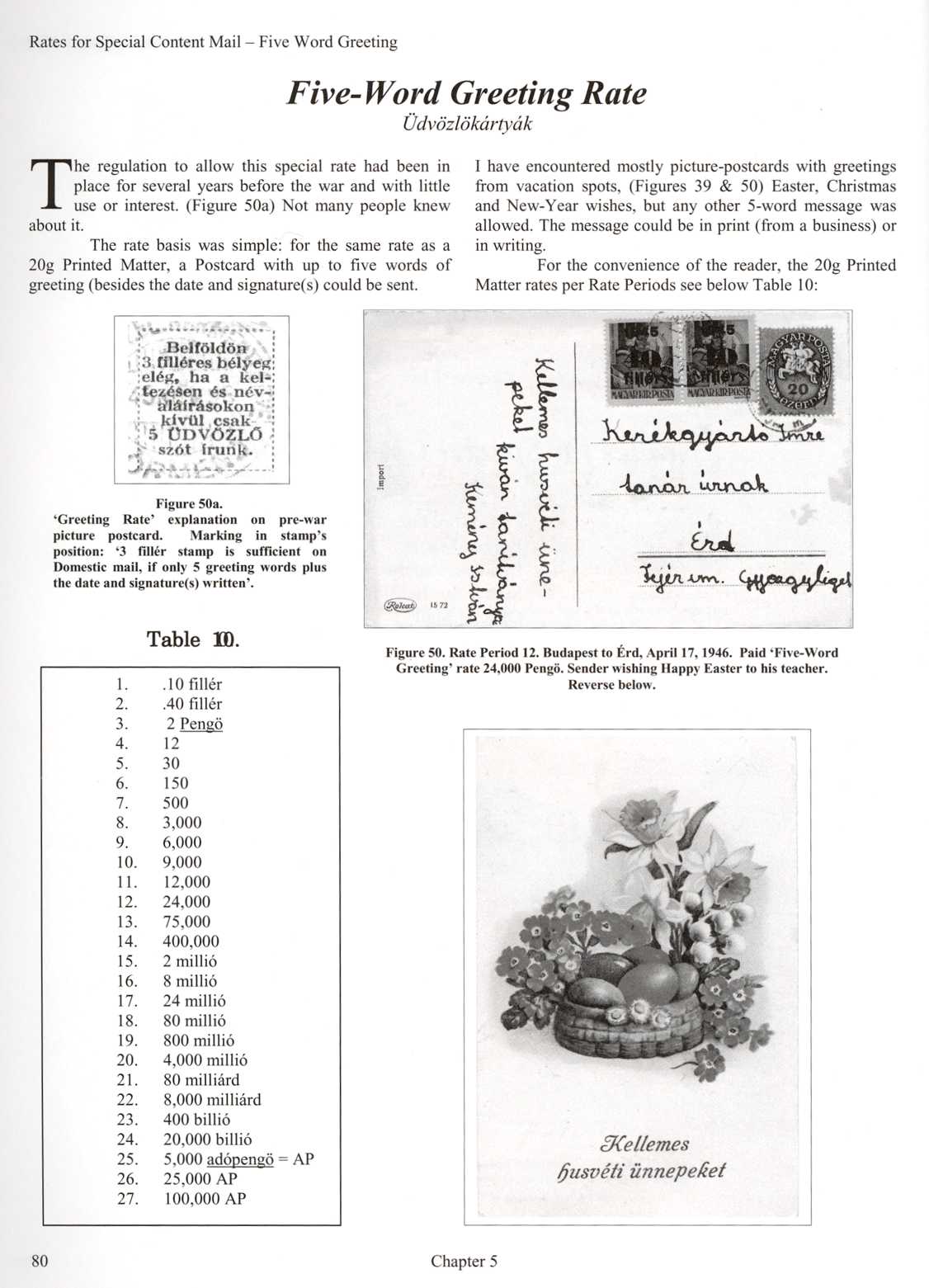 The Hungarian Hyperinflation of 1945-1946, The Postage Rates and Postal History of History's Most Impressive Inflation by Robert B. Morgan, LC No. 2003-104997, ISBN 0-916675-14-9
An exceptional study of 27 rate changes over a two year period, excellent history and philately, well written. It covers all forms of postal service: Air Mail, Registered, Diplomatic Mail, Parcel Post, Express, Five-Word Greetings, Printed Matter, Matter for the Blind, Censored and many more.

Intercepted in Bermuda, The Censorship of Transatlantic Mail during the Second World War by Peter A. Flynn, ISBN No. 0 9166775-15-7
Bermuda was the main point for censorship of mail going by air or ship between the Americas and Europe. There is much history on the service with a listing of the arrival and departure of planes from May 1939 through December 1945. The data base recording over 7,900 covers which has permitted a detailed listing of the markings and there usage, the tapes, examiners, earliest and latest usages by examiner number, etc. 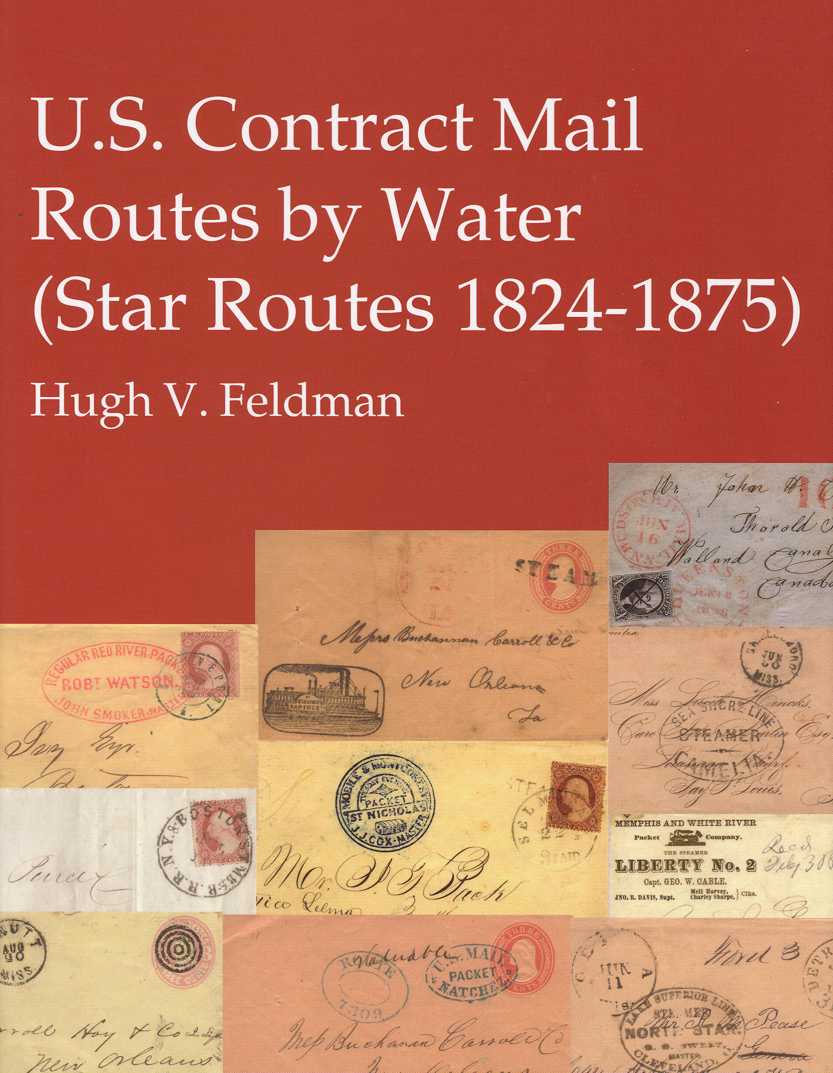 U.S. Contract Mail Routes by Water, Star Routes 1824-1875, by Hugh V. Feldman, LC No. 2007-943218, ISBN 978-0-916675-15-8
The contract water mail routes for the entire U.S.; excellent, written descriptions, maps and table. A spectacular book with tremendous value to the collector, numerous maps and covers all in full color, 260 pages on detailed listing and analysis of the routes by state, 50 pages on the procedures and history, five appendices, three indexes and a gazetteer. 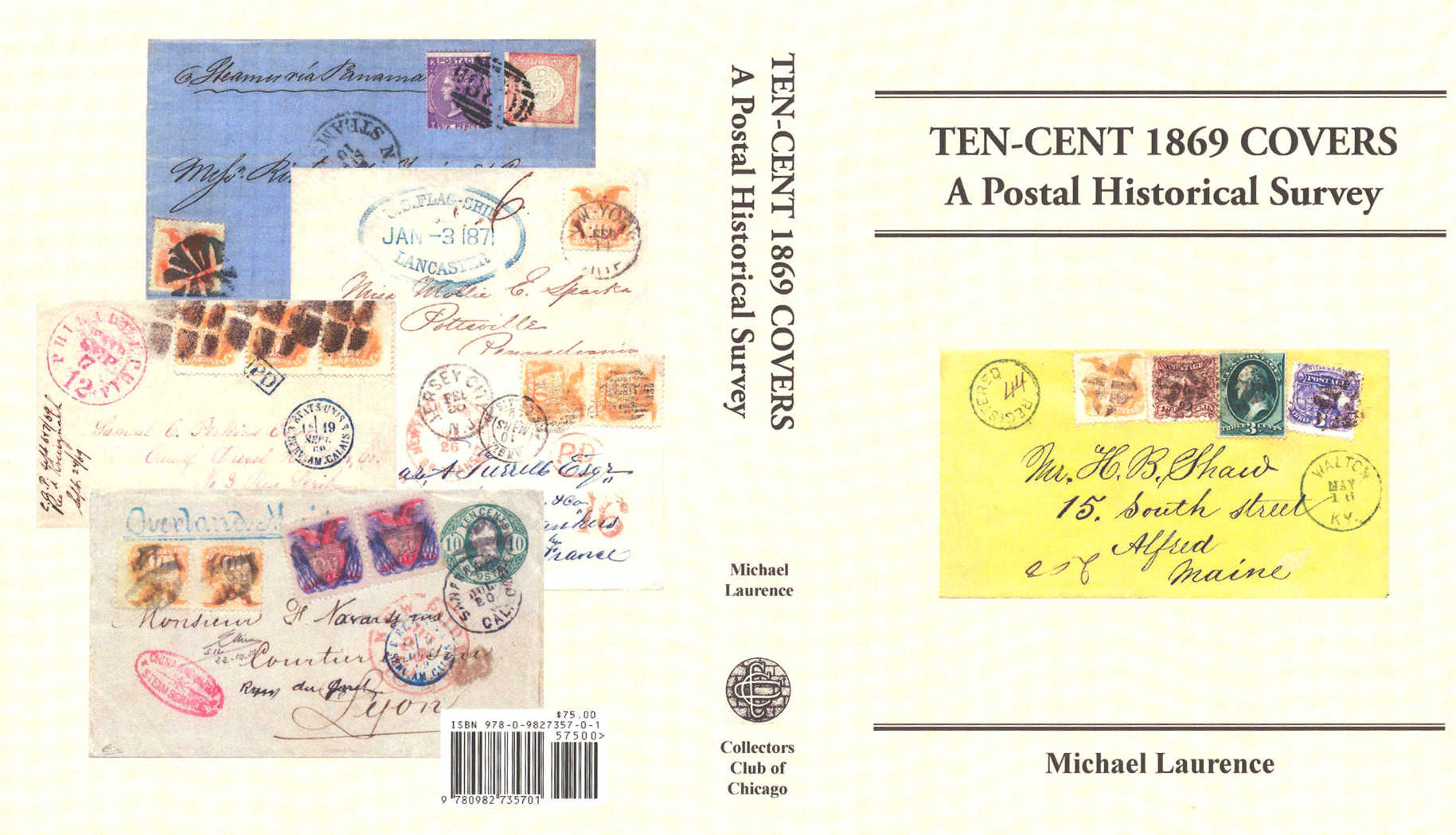 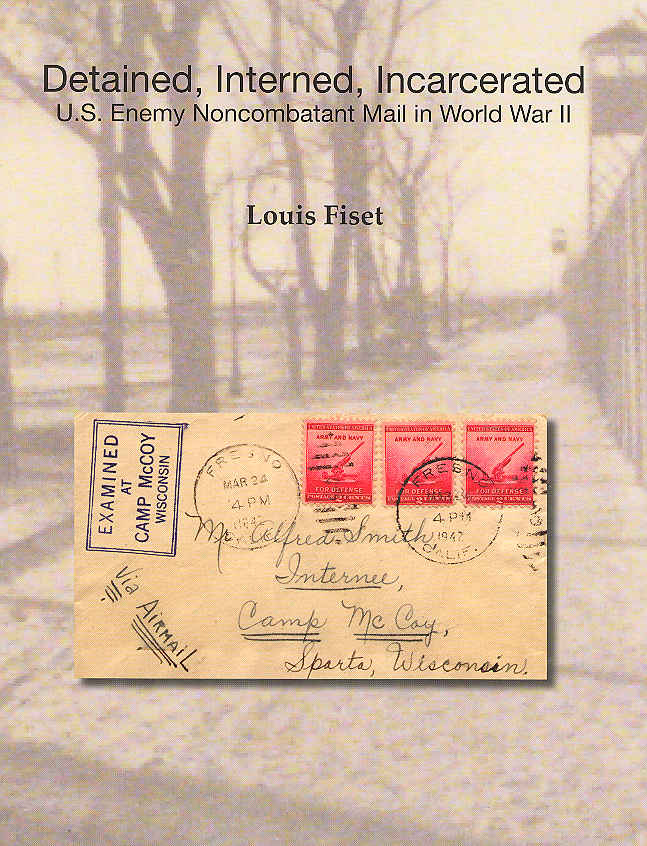 
Background explaining why, how, when, and where U.S. citizens, resident enemy aliens, diplomats, deportees from Latin America, and Axis merchant seamen were interned. More than 250 illustrations showing covers, censorship, and postal markings from camps operated by the Army, Immigration and Naturalization Service, State Department, and War Relocation Authority. The first compilation of mail of noncombatant civilians, diplomats, and Axis merchant seamen held by the U.S. government during World War II. To understand why political groups were incarcerated as well as their postal history, background on historical events of the war relating to the groups incarcerated is necessary. Specific historical facts are present to aid philatelists in finding relevant postal history.

Chapters include the postal history of the two diplomatic exchanges with Japan carried out by the mercy ship, M.S. Gripsholm, and of Japanese American soldiers, many of whom entered military service after their incarceration in relocation centers. Twenty four 24 tables provide data on camp locations and populations, postal rates, and other details of importance to collectors, including a table on these covers' scarcity. A CD contains three of the author's gold medal exhibits offering additional illustrations of internment camp mail.

The United States Postage Due Essays, Proofs and Specimens 1879-1986

An exceptional book with respect to understanding the postal operations of all of early Spanish America and not just El Salvador though the book is devoted to El Salvador, the rates, covers and markings, extensively illustrated, edition limited to 300 copies, 2015, 286 + 18 pages of which 26 are in color, cloth, with dj, $72.50 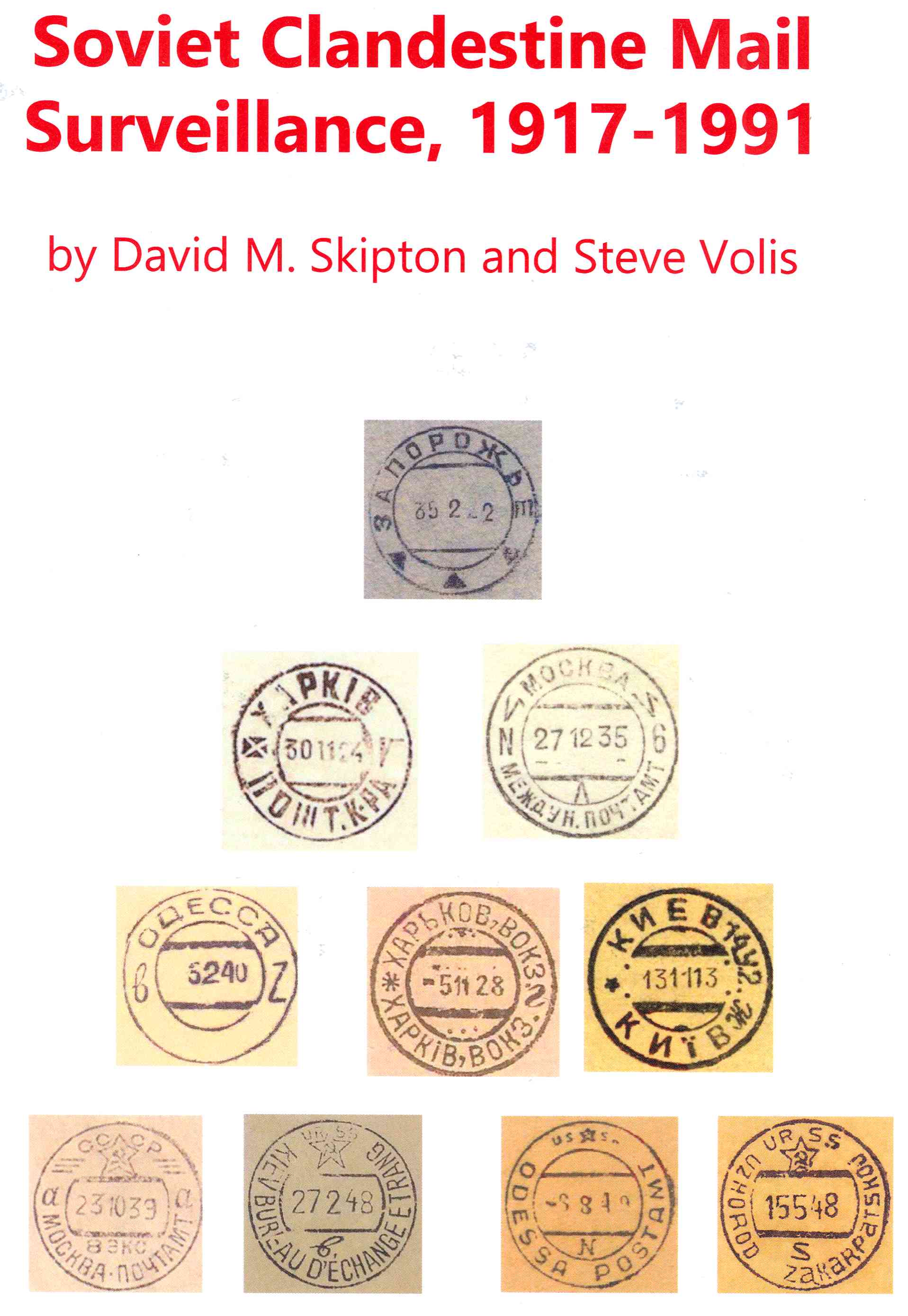 A hybrid of philatelic research and history.The political control offices that secretly watched the correspondence of Soviet citizens and foreigners in the USSR and demonstrates that these offices used censor marks resembling postmarks to convey information and instructions between the branches. Hundreds of these censor marks (and censorship-related date stamps) are recorded and illustrated; along with hundreds more that the authors contends were used to aid in the "classification campaigns" of the 1920s. cloth, all-color, 554 + ix pp. edition limited to 300, 2016, 554 pages, full color, cloth with dj, $98.00

U.S. Railroad Contract Mail Routes (1832-1875) by Hugh V. Feldman This book runs 1,096 pages. in full color, hard bound, dust jacket, illustrates 242 covers, 582 maps and 360 other images. A DVD is included containing over 800 covers many are not illustrated in the book, PMG annual reports and other reports to Congress between 1817 and 1878, these run about 10,000 pages. Also included are images of the manuscript Railroad Contracts by States, 6,773 in all. We think these contracts have never been reproduced before. Published at $97.50 plus postage, postpaid to a U.S. mailing address, $107.50, postage to other countries is the published price of $97.50 plus actual postage, to Canada is $54.65 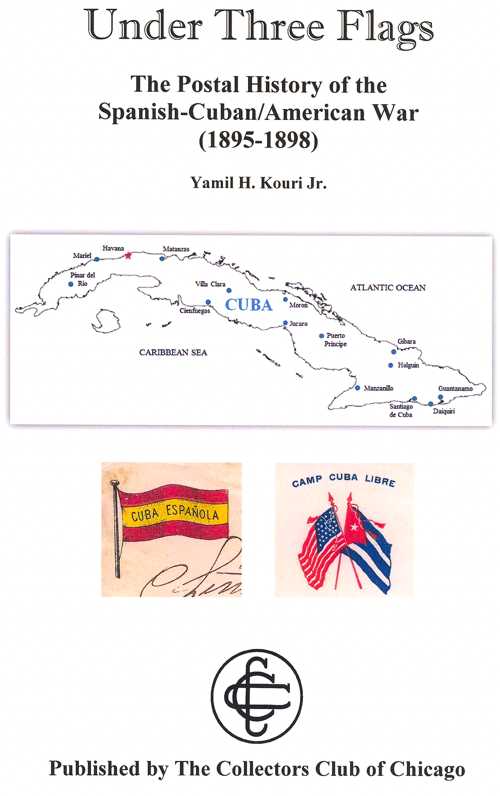 The History of Airmail in Poland and Its

Small research pamphlets that get to the subject quickly. We will supply any or all of the above Arthur Salm reports at no charge with a book order as long as supply last. A slightly updated version of the above is on the Collectors Club of Chicago web site. http://www.collectorsclubchicago.org/

A Quick E-Mail to Leonard, Leonard@pbbooks.net