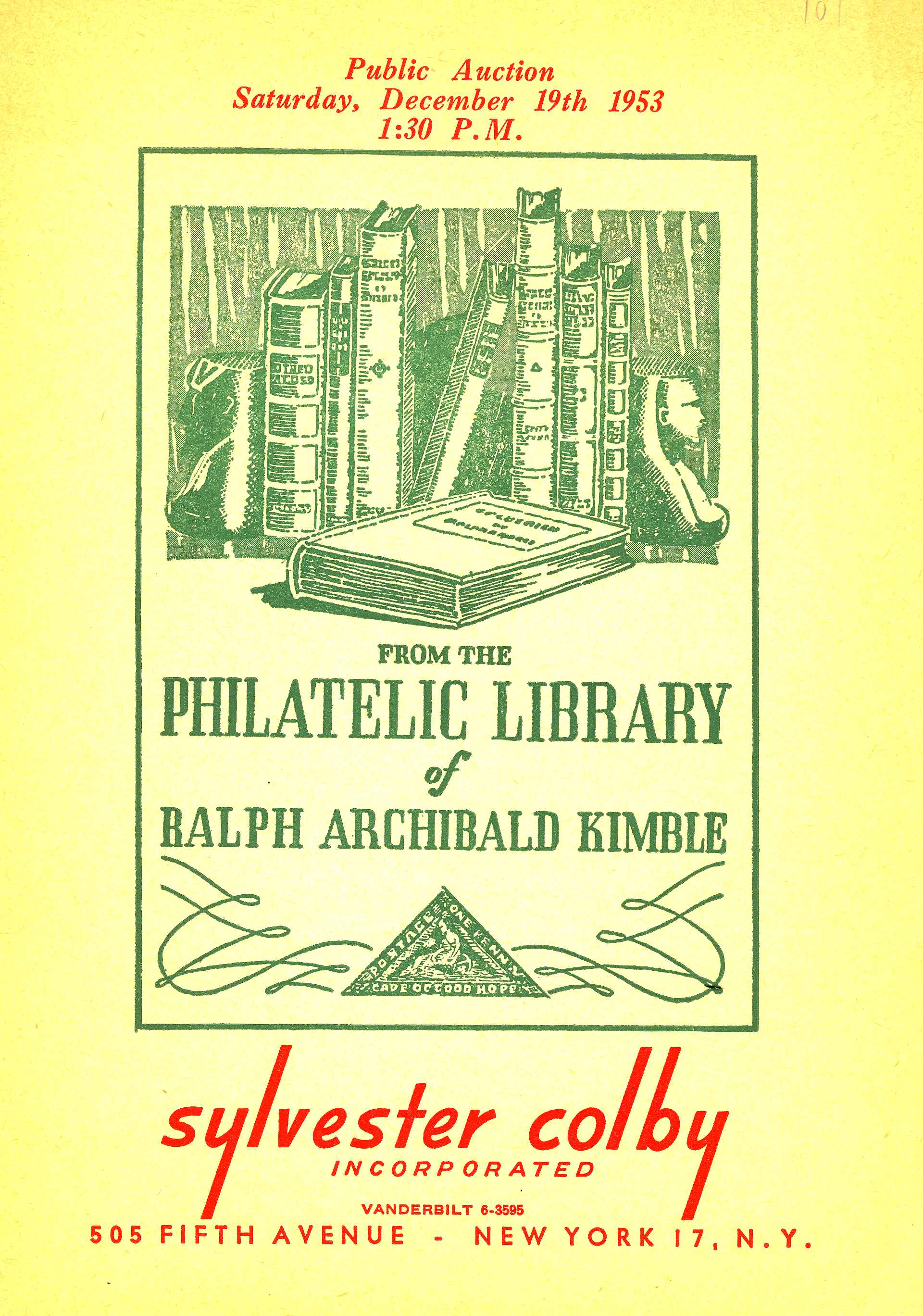 Long forgotten, I originally started this article in the early 1980's and recently ran across it while working on another project. I have updated, expanded and corrected. Over the years help on this article was provided by Sy Colby, George Turner, Herbert Trenchard and more recently by Brian Birch. I trust it is now fit for publication.

From 1950 through 1972 Sylvester Colby, Sy to his many friends, was the primary dealer in serious philatelic literature in the US. In addition to his auctions he maintained a literature stock in his New York office and frequently featured literature in his advertising, remember Sy's back page in STAMPS !

My own interest in literature started in the late 1950's when I purchased a few items from Sy's sales. I still treasure my first run of The Philatelic Gazette purchased by Van Dyk MacBride for me in the late 1950's. At the time I was mostly interested in literature and material pertaining to the CSA. I either didn't receive or didn't manage to keep all of the sales but in 1976 I became quite interested in them as a collection.

In 1978 I purchased the Murl Kimmel library, and marketed much as The Library of a Western Gentleman, at the time the Kimmel family did not want publicity. Murl was George Turner's main competition for literature but with slightly different interest. Murl wanted the rarities in the best possible condition and George wanted the rarities period. Murl kept buying until he had the best, the library had three sets of the Ferrari auction catalogs, I still have the ex Alb. Kronenberg set. As this purchase had us quite extended I did not make a real bid on the Turner library. It was sold to Roger Koerber but not the entire library, much was directed in George's will to others, the Smithsonian, individuals, etc., the remainder was sold in Koerber and offered in his massive 1981 auction.

Sy started in the stamp business in the early 1940's and the auction business in 1943 when he ran ten of Robert A. Siegel's sales while Siegel was away from New York in the Armed Forces. These catalogs correspond to Siegel's No. 89-98. Sy's name does not appear in the catalogs. Number 88 is headed Robert A. Siegel and starting with 89 they are titled Robert A. Siegel Auctions. Evidently Siegel liked the new logo for the word Auctions and the flourish remained unchanged for many years after he returned.

Siegel Sales by Colby, not Colby Numbers in Catalogs

Sy's own auctions started with his October 13, 1944 sale that was called by Gregory Mozian, Gregory continued through the July 1st, 1947 sale. The outer back page of Sy's second auction, Dec 12, 1944 is a strong promotion to continue the war "Go On To Tokio" and soliciting donations to support the National War Fund which included the USO. Philately as with most facets of American life supported the war.

These first 29 catalogs, 44 sales, issued under Sy's name are without sale numbers but when he started numbering his sales in 1949 he counted back each session in his un-numbered sales and the 10 Siegel ones to start with No. 55 on February 5, 1949. A Colby auction number was assigned for each session thus a catalog may have one or several numbers.

The early Colby catalogs have the sale numbers only on the bid sheet and thus are missing from catalogs lacking them. Starting with sale 229, May, 1970 each catalog also had the number on the upper right corner of the front cover. February 28-29, 1956 sale bears No. 116 however this sale had two sessions and in reality was 116-117. This is the only error in the Colby numbering, it was evidently immediately caught as the next catalog is No. 118 and there is no No. 117.

On these the first seven sales, 142-152, are mail sales and are described as simply Auction Sales with a closing date. The remaining three, 153-167, are Headed Public Auction Sales and have a time in addition to a date and appear to be true auction sales. Sy said the first eight broadside sales, 142-153, appeared in either LINN's or WESTERN STAMP COLLECTOR and were intended to increase his exposure to obtain new customers. The above listed broadsides are thus offprint prints on decent paper and were sent to his regular customers. Herbert Trenchard confirmed that no printed prices realized are known from any of the seven mail sales and reported that two magazine formal sales were also printed in WESTERN STAMP COLLECTOR: It is quite possible that other offprints exist and other sales were reprinted in journals. Such material often wasn't retailed.

A special U.S.O. auction sponsored by the ASDA is contained in sale No. 177-78, pages 25-27, May 5-6, 1967. Herbert Trenchard recalled that George Turner had an offprint of the U.S.O. section and the format of the catalog definitely suggests it was intended but I have not seen one. The Turner Colby run did not have it, though George could have filed it in another place and was not in the sale lot.

Starting with the King Library in 1950 through David Lidman's in 1972 Colby issued 20 catalogs that can be classed as major literature sales and had some literature in 29 other catalogs.

The three catalogs for the Ralph Archibald Kimble sales give George T. Turner as the cataloguer and compiler, George did this for all of Sy's literature sales starting with King in 1950 through the third Kimbel sale in 1955. George privately purchased the King, Stern, King-Farlow, Konwiser and Kimmble libraries and sold the duplicate material in the Colby sales. All of Sy's literature sales through the Kayes, sale 162, contained some Turner duplicates.

George Turner purchased the William C. Kennett library and included the duplicate material in Sy's 1953 King - Farlow sale. William C. Kennett was Arthur Hind's close friend and philatelic secretary thus many of the Kennett items are also ex Hind. In the 1980's much of the Kennett material was still in intact and in private hands as only a little was sold in the 1953 sale.

Herbert Trenchard advised that he knew of only four complete sets of Colby auction catalogs. For this he defined a complete set as the basic Colby catalogs but not necessarily all of the offprints or the Siegel sales. One such set was prepared by Sy for Dr. Donald Dahlquist and is now in the Western Philatelic Library. This set is bound and does not contain the 10 Siegel sales or other items.

One of Sy's personal interest was the 3˘ 1851 thus the long association with Carroll Chase and the other iconic students on the classics. Sale No. 50 shows an early interest in Duck Stamps in catalog 70 with a full page illustration of singles and blocks showing only the perforations as this was November 30, 1950, the legend under the plate states "Vignettes deleted in compliance with Treasury regulations". Named sales have been around from the early 1900's however many significant items were distributed in catalogs with no indication of the owner thus attribution can be difficult, also illustrations were few and in many cases not present. Sy was an extremely friendly person, most jovial however with many dealers he tended to keep his source of material confidential and in the 1940 material was often distributed through a number of sales and the owner often not identified.

Offprints were made for portions of some sales to provide specialist with the offering, these that I have seen are on thin paper and probably were rarely retained. The 1950-1960 was a period of low printing and postage costs. Little is known of these but they were evidently intended for specialist society members. The Duck Stamp sale, No. 82-3, Nov 27, 1951 has a special offprint for lots 121-375, thin paper. I am told an offprint from sale no. 22, lots 101 - 286 was made for Bureau Issue Society members in a broadside format. Also a special offprint from sale no. 168, lots 444 - 491 for the Society of Israel Philatelist as two pages and two pages of plates. There could be others.

Sy issued several bound volumes of his auction catalogs. The Rossi sale of June 24, 1971 has on the last page an advertisement for a one volume set of the last 20 years of literature sales from King in 1950 to Rossi in 1971 with prices, would be available for $30.00. I have never seen one however a friend indicates he has one but it is not exactly as advertised, no Hitchins or McCracken or prices realized. Also Sy offered the three Ward sales in one binding for $5.00 with prices realized bound in an orange buckram. Special bound volumes were also prepared for his friends and customers, I have seen one for the Ward and Ritzman sales, in a black "leather" with gold stamping and tooling.

I understand Sy started in the stamp business in the early 1940's but his auction career started with the Robert A. Siegel sales in 1943 and ended with the Siegel sale of his personal library on November 15, 1974 as No 461. In US philatelic literature New York was the center, Sy was proceeded by Paul Bluss and followed by Louis K. Robbins. I did not know Paul but Sy and Lou were old friends and liked by all.

In 1972 Sy's wife Dorothy died and after that he closed the auction business and retired to Florida. Sy continued to "cry" sales for other auctions for about ten more years. Sy was quite popular to call other auctions for his ability to crack jokes and keep everything moving was evident, he is reported to have "cried" a number of sales for Robert E. Lippert, Cleveland Stamp, William A. Fox, Sal Salkind, Mercury Stamp Co. and probably others.

Sy died on May 15th, 1984 at the age of 80 years. Bill Bogg attended the funeral as did many of Sy's friends; Bob Siegel, Pat Herst, Raymond Weill, Bill Fox, Gordon McHenry and others.